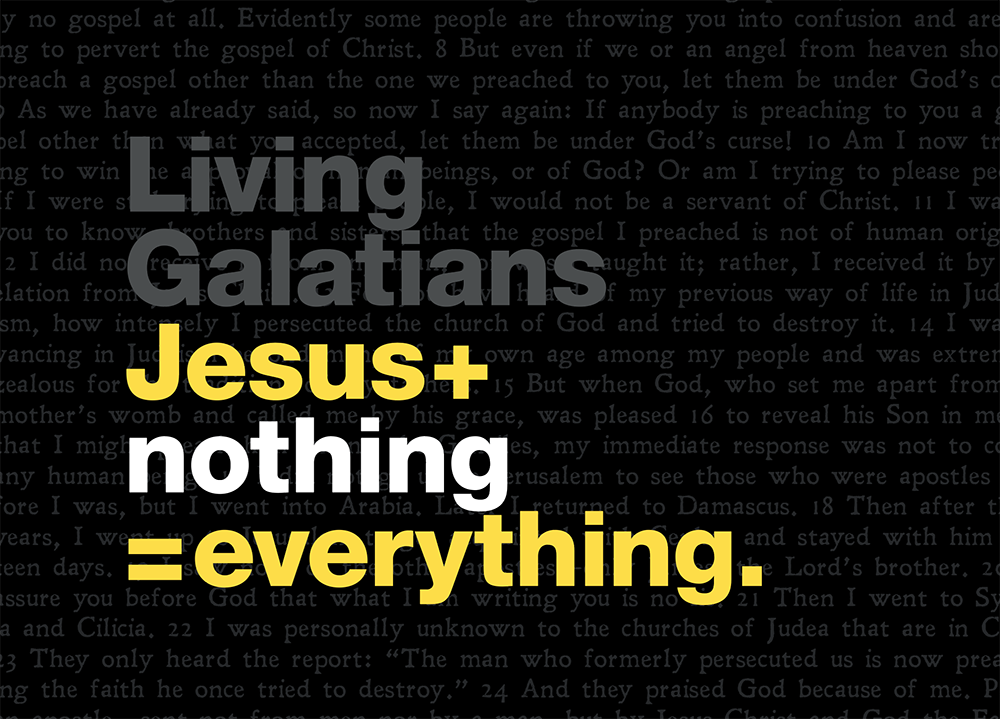 A few years back, a friend of mine was retiring from pastoring a church through illness. He was in his sixties, had served in mission work and pastoring churches all his adult life, and was dying of cancer (he’s since passed).

I remember him saying that on his last week in the pulpit, one of his congregants came up and said, ‘I think I’ve worked out what you do. You have only ONE message…and over the years, you’ve shared it a thousand different ways’.

When I heard that, I thought: ‘what an aspirational goal!’ I would preach grace every week.

I guess yesterday was around week 600.

If there is a shadow of a doubt that God is for you and that nothing can stop his love towards you, nor separate you from His love, look to His Son, Jesus, and the grace he offers you.

John writes, ‘This is love, not that we loved him (which is a response to his grace), but that he loved us and gave himself up for us as an atoning sacrifice for all that we would, could and will do to put distance between him and us.

Yet, like any gift, it must be RECEIVED by faith. It’s not dependent on our actions but on God’s. It’s extended to us, but it must be received by us.

John 1:12 says, ‘Yet to all who did receive him, to those who believed in his name and called him Lord, he gave the right to become children of God.

Jesus’ grace is AVAILABLE. Available to everyone who would reach out and receive it. Even those we might like the idea of disqualifying.

If you’ve grown up in a conservative, legalistic, finger-pointing environment, that truth will mess with you.

Our job is not to make the call on whether someone is suitable to receive the gospel. In Jesus, the answer is YES.

Grace is for anyone struggling with anything. And for anyone who acts as though they’ve got it all together.

Grace comes only through CHRIST. The only person, the only God/god who has ever dealt with our sin problem, is Jesus.

We have a problem that’s unsolvable in our own strength. We sin. That sin separates us from God. Trying harder doesn’t help because no one’s perfect or righteous. On the cross, Jesus says, ‘I see your problem, and I’ll live the perfect, sinless life to qualify as your sin-payer. I’ll deal with your sin debt – past, present and future.

Grace is EXTENDED throughout eternity.

What left a mark no longer stains because grace makes beauty out of ugly things.

Grace changes our hearts – it shapes how we live. It’s not cheap; it’s deep.

At one point, the Apostle Paul says, ‘shall we go on sinning that grace may abound? May it never be’, because grace transforms us to want to do what we ought to do. Our efforts do not gain grace, but our lives are shaped, marked, and transformed by it forever.

I was reading a little book this week called New Urbanism. It talked about our tendency (from an urban planning context) to love the idea of community but want to put as much distance and barriers between us and others as possible.

The quote in the book was that we have sought out ‘community without propinquity’—proximity without the vulnerability of nearness.

As I was reading this little book, I scribbled down:

‘There’s no grace without propinquity’.

You can’t stand far off and receive grace. Jesus has come close.

He stands beside us as he stood beside the adulterous woman confronted by the Pharisees and says: ‘I don’t condemn you…receive my love’. He says: put down your stones of self-condemnation and the stones of condemnation inflicted by others and allow me to take up the centre space of your heart.

By his actions, Jesus says, ‘Propinquity is what I’m all about’.

The Word became flesh and dwelled among us. The Word put on skin and moved into the neighbourhood. God, through His Son, Jesus came close and comes close. And he says to us now: Let me in by faith so you can receive and keep on receiving my amazing grace.

When we’ve been there ten thousand years, bright shining as the sin, we’ve no less days to sing God’s praise than when we first begun.